Yes, we had one and it was sooo good! It was the best tasting blueberry cheesecake that I have tasted, so far. There’s not an inch of  umay factor in it. It is neither too sweet nor too creamy. I actually had to exercise extreme self-control in order to save some for my husband and our son. The best thing about this unforgettable cheesecake is that it was homemade with love! 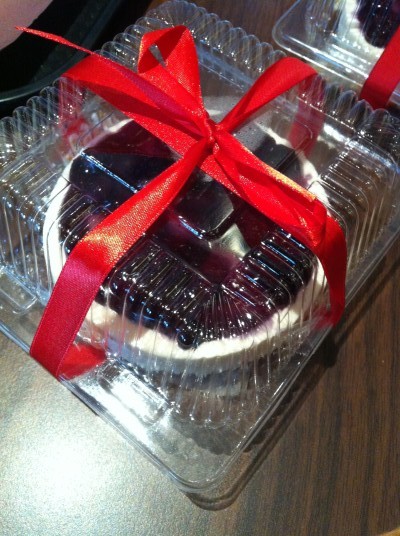 The cheesiest gift I have ever received!

I happen to work with Joy of Joybites.com, the very talented lady who made this mouthwatering dessert. In one of our group discussions about cinnamon, she asserted that omitting that spice from the cheesecake recipe would not make a difference in the final taste at all. I, for one, am not a fan of cinnamon and would avoid bread and pastry that have it in the ingredients. Given that, I readily agreed with Joy’s statement. To further prove her assertion, she said that she would bake a no-cinnamon cheesecake for the team on our next meeting. The day of our meeting came and each of us received a dainty box of cheesecake. I took a snap of it the moment Joy handed it to me.  I know that it would be either eaten right away or would get tossed in transit so I needed to capture a photo of how this edible gift was presented nicely.

I served Joy’s blueberry cheesecake for breakfast the following day because I know that it would be perfect for my husband’s cup of coffee and my mug of warm milk. And it was! Our little boy had some, too. What I liked most about this delectable dessert is that it has the right mix of fruity and creamy in it. I also super love that it does not have even a dash of cinnamon in it. My son doesn’t like that spice too and he would grimace whenever he was asked to have a bite of anything that has cinnamon in it.

Should you want to know how heavenly that blueberry cheesecake was, get in touch with Joy through her website 🙂