From the wee hours of the morning up to 10 AM today, Typhoon Glenda (Rammasun) has bombarded Metro Manila with horrifying winds that made me feel I was in the setting of a horror movie. The strong winds was accompanied by non-stop rains. The power went out at around 2AM.

Early this morning, at the peak of Glenda’s wrath, I have closed the last two windows in the house which I have left open yesterday to let some air in. They kept on banging on the window frame and I fear that they might either shatter into pieces or wake up my sleeping baby. I actually I feared the latter because I don’t think I can carry my baby and put him back to sleep. I barely had forty winks and my hands were aching because I was fanning him the whole night to make him feel comfortable despite the very stormy weather and the absence of a working electric fan. I was so glad that he was able to sleep up until around 9:30 AM with air from Mommy’s makeshift fan and breastfeeding in between.

While my baby was asleep, my husband and I were mopping the pool of water that surprisingly surfaced in the floors of our bedroom, in the hallway and in the living room. We also had to put rugs under the main door and on the one leading to the terrace to keep rain water from flowing inside the house which was not quite effective since the water came through anyway. He went outside to the garage and found out that the cover of our washing machine was blown away and was dripping wet leaving our poor machine drenched in the rain. Our downspout also got misaligned and a portion of our roof was torn away. Holes on the ceiling in the living room near my desk gave away and drips of dirty water were coming from them. 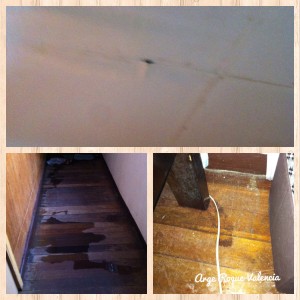 Clockwise from top: The hole in the ceiling at the living room started with just one. Now they are three. Water beneath our bed. Puddle in the hallway.

My parents’ house were severely damaged by this nasty typhoon. Water was all over the house. The tarp covers in the garage and in the garden were torn. The little cottage right outside the house was all wet. Part of the roof in the laundry area gave way, too.

I couldn’t imagine how the homes in the Visayas have survived. They were the ones who have been hit first by this typhoon. I just hope that everyone was safe and was able to get through all of these.

It hasn’t rained since lunch time but the sky is still dark and it’s a bit cold. Our neighbours were able to go out and clean up the mess that the typhoon has brought about. Our energy provider has just issued an advisory indicating that they are assessing the extent of damage on the facilities and that they are doing their best to restore power as soon as possible.

I just hope that tomorrow will be better. The sun will be shining again. Power will be restored. Everything will be in its proper place again.