My Baby is Now a Toddler

March 14, 2014 by Arge No Comments
And he is 14 months old today. How time flies! I still can’t stop calling and referring to him as “my baby”. My husband would often say that he is already a big boy. To which I would always object and say that he is still a little boy and he will always be my baby. Am I in denial? *cricket sounds* 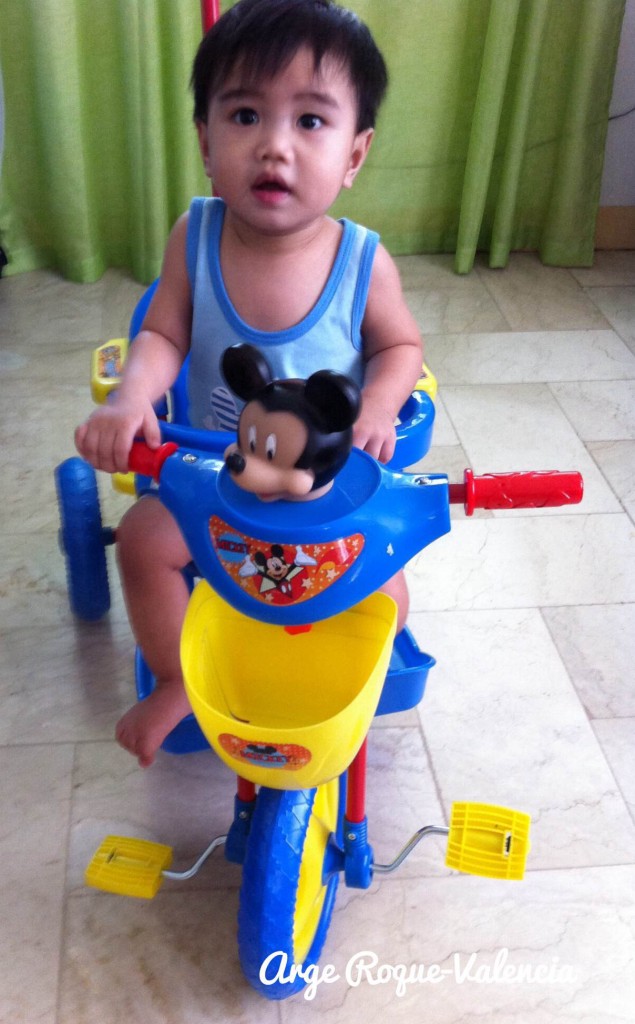 As of this writing, our Mr Pogi is sleeping while nursing on me. He got bitten with the cold virus again because of me and my hubby. We both have just recovered from the virus but during the days when we still had it, we were with our little one and we can’t stop kissing him and he would kiss us back. That’s how we passed on the bug to him. I felt so guilty because of that and kept on saying sorry to our baby and praying fervently for his healing.

Despite the coughing and the runny nose, L couldn’t be stopped from playing and moving around. He enjoys the space that we have a lot. His Daddy and I would move our furnitures so he can bike around the house. Actually, it was more of us pushing him on his bike as he cannot pedal on his own yet. He likes it and he would even stand up while the bike is moving ala BMXer!

He crawls very fast and he is cruising much faster. He recently became confident of climbing down our bed which is a bit high for toddlers. Last week, when he woke up from his morning nap, he stood up on his own. Walang hawak! I was really amazed at that milestone. Since then, he’s been practicing standing on his own and I know that it won’t be long before he can do it more frequently and confidently.

The food choices for our little boy has increased. There has been an increase in the food groups that he can consume. Lately, he’s been eating munggo, bangus, champorado and cereals. I was also able to give him calamansi juice with honey at the onset of that bad cough.

And because he is growing up, our boy is starting to express his likes and dislikes. There are times when he would get into tantrums. When it happens, I would just ignore him and he would stop right away. It was as if he understands that that kind of behavior won’t sit well with Mommy. I told my husband to do the same. We don’t want to raise a spoiled brat. When the tantrum is over, we would talk to our toddler and explain why we wouldn’t allow something. We would then reaffirm him that he is a good boy and that we love him so much. We are now reaping the benefits of the parenting seminar that we attended a couple of years ago.

At 14 months, my husband and I are praying that our son will be blessed with more growth and development milestones and that he would be spared from harm and danger. We also pray for strength, patience, grace and wisdom as parents for us to take better care of our precious little one.

Are you a parent of a toddler, too? Please do share your parenting tips in the comments below. Thanks!

You will read about our journey in homeschooling, my hits and miss in being a plant mom, my "joy" in baking, my newfound love for sewing, and most of all, my amazement at how GOD sustains me with His blessings, grace and mercies in my every day life.