Of Siblings and Happy Meals

We rarely buy the complete set of featured toy’s at McDonald’s.

This June 2017, the fastfood giant has the adorable Agnes and the Minions as toys in every Happy Meal since the sequel of Despicable Me will be shown in cinemas this month. We have seen the first two movies including its offshoot Minions movie. But, my son loves the first Despicable Me movie the most, as keeps on asking me to play it every single day.

When his Dad asked him which toy he wants from the selection of this month’s Happy Meal, he asked for the Agnes toy. His Dad, surprised, asked him again which toy he wants. Our boy just repeated his previous answered. The following night when his Dad came home from work and gave him his requested toy, he thanked me and his Dad before opening it. When it was out of the package, he looked at my preggy tummy, held out Agnes and said, “For baby!” I was touched by the thoughtfulness of my four-year old! He opted to get a toy first for his baby sister even when she wouldn’t actually see her big brother‘s gift yet until September. I was amazed and a bit surprised at his gesture. For four years of not having to share his Happy Meal toys (at least when playing at home), he suddenly thought of giving first to his sibling who is yet to be born, before having his own toy. I pray that he will continue to be generous to his sister and his sister would be the same to him as well as they grow up.

In the days the followed, my husband kept on having Happy Meals for lunch so he can bring home the Minions toys. Last Saturday when we went out, each of us ordered a Happy Meal for merienda just so we can get three Despicable Me 3 toys. Check out our first ever video about toys below.

Here are all the Despicable Me 3 Toys that we got from McDonald’s Happy Meals. 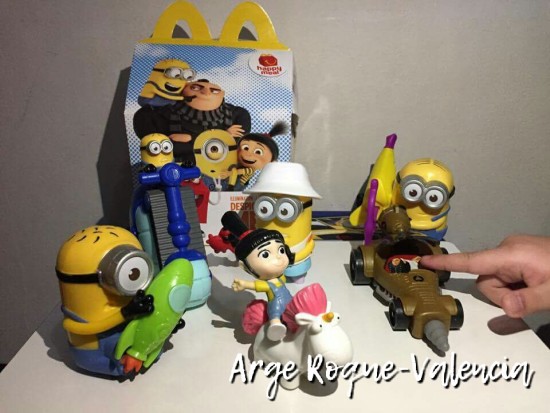