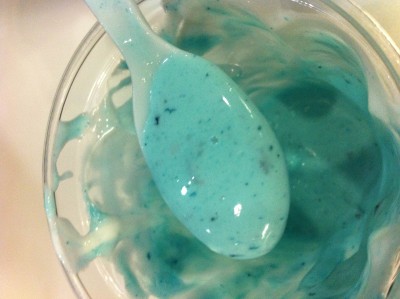 The McDonald’s Blueberry Smurf Sundae has been available since the movie Smurfs 2 was shown here in the Philippines but I have only tasted it last night.

Mark of GintonForge (Hi there, Mark!), my officemate, posted a question on FB asking for the video of Tinapang Bangus, one of the many songs that Batibot fans have come to love. For those who don’t know what I’m talking about, Batibot is a Filipino children’s television show that kids of my own generation have come to love for 18 years.

Going back to my colleague’s wall post, he said that he would give anyone who can help him with his dilemma with…..10,000 points! Ano yun?! Being the giddy, join-any-contest participant that I am, I scroll through the comments and saw that his sister posted a Batibot video clip from a 2011 episode of Jessica Soho’s show. Mark couldn’t find it. Well, because he’s too tamad to watch it hehe. I watched it and then I posted a comment, “At 2:50!!! Tingtingting!!! I want an ice cream…  🙂 ” Minutes after, Mark popped into my cube and offered to buy me an ice cream. I initially wanted the 7-11 sundae cone but when we got to the store, it isn’t ready yet. So, off we went to McDo and I opted to try out that blue ice cream. Glad I chose it! It tastes so good with just the right amount of sweetness and blueberry bits. I will definitely get one on my next visit 🙂