When you’re stuck in traffic or enduring a long commute, let The Aila Comla Show on FB Live entertain you! It’s the first of its kind here in the Philippines and the brainchild of an events engineer and mom of two, Aila Comla. Acee, as she is fondly called by loved ones and friends, took advantage of Facebook’s Live feature and created a show of her own, with a format that’s a bit similar to a radio show. Each morning, after she and her husband have taken the kids to school, Acee would set up her smartphone and go on broadcast as her husband continues to drive on their way to a meeting or while running some errands. And just like that, she became the first female car jockey in the Philippines. 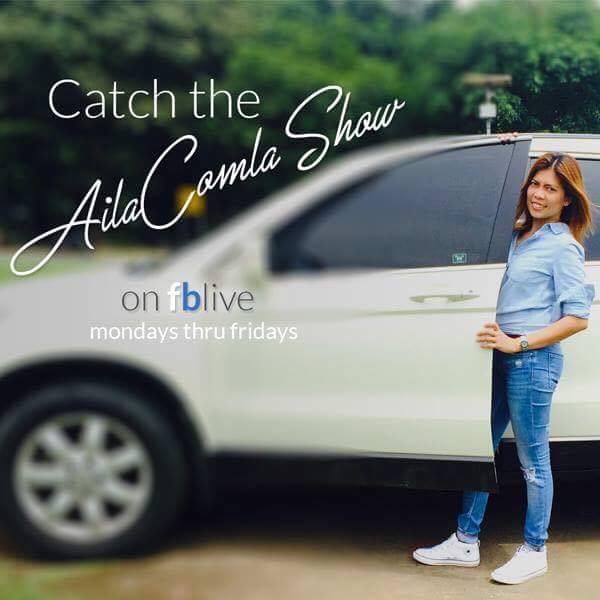 Get to know more about The Aila Comla Show and the car jockey herself from our Q & A below.

Arge: When did The Aila Comla Show (ACS) began and what prompted you to set this up?

Acee: Actually, it  all started out of curiosity. I was like in the car and just looking on my FB account and just wandered about the FB live button and when I pressed it I begun talking about anything under the sun. And after that, I was shocked to see that it gone through 1k views already. I received private messages from friends saying that it was a nice show. You did it! Then I asked myself if I am ready for this. As we know, you cannot please everyone, there will be bashers anywhere, so If I continue doing this, I should be ready and be prepared for everything. It’s social media anyway, one of the most influential media,  I must say.

Arge: Aside from live greetings and trivia, what else can we expect in the re-launch of ACS?

Acee: Well, we will be having different segments aside from the “Greetings Galore” and trivia. On the re-launch, it’s kinda new thing because we shall be having a joy-ride guests, phone patch interviews, jamming, “What’s Happening?” (events to hook up), the usual traffic zone and weather updates since we are always on the road. And I want it to be as literally ALIVE show, that viewers can set aside their pressures from work and anything that bothers them. I want them to smile and be happy 🙂

Arge: What are the challenges that you encounter in running the ACS?

Acee: The challenges… WHEEW! It’s getting a better signal because we are moving. You know why? Sometimes when you’re really on your momentum and viewers are participating and then suddenly the signal becomes weak the viewers get to dropped.. Ugh! It is like you are going to start all over again.

Arge: What motivates you to keep up with ACS?

Acee: You won’t believe it, but it’s because of people like you who believes in this kind of show and the #ailanatics who wait the entire day, texting, pm-ing me asking what time will I start to be on FB live so that they can watch and stay tune. And most especially, the people who send their interest of sponsoring this show like giving me GC’s, discount cards and other freebies for the viewers. I’m very thankful for the following sponsors:

Arge: What are your future plans for your show?

Acee: Speaking of future plans, I hope to make it a big show, have an activities like meet and greet with the people who view it, more cameras inside the car 🙂 and invite big personalities as well. And as much as possible, a show not just to make people smile but to inspire and empower them :).

Acee’s career includes working as a radio artist for six years.  She was part of “Barkadahan Radyo-radyo”, a singing contest over radio with a skit drama. The show was then reformatted to a variety show called  ” Awit Tawanan” with Tito Joey Galvez and May Valle (now Ceniza). After a year, she also became part of the “Baranggay Showdown”  with Martin D and Tita Winnie Cordero. It’s a game show where they go to different baranggays via remote live show.

In between radio projects,  Acee had gigs dubbing for local TV shows (Firefly, a Koreanovela,  and Twins of St Claire, a Tagalized cartoon series) and some Pinoy movies up until she was five months pregnant with her firstborn. She also had a brief stints in teleseryes like Hiram and Sarah the Teen Princess. She stopped accepting dubbing projects when she became a mom. She couldn’t stay up late because she wants to be a hands-on mom, personally attending to her kids’ needs.