All aboard the Birthday Express! Fresh from his nap, our little boy sat quietly in his stroller as we hurried to the Atrium of the SM Mall of Asia where Thomas’ 70th Birthday Bash was taking place. It was a carnival themed party where lots of pocket activities were taking place at the same time while the emcee began with the program on stage. 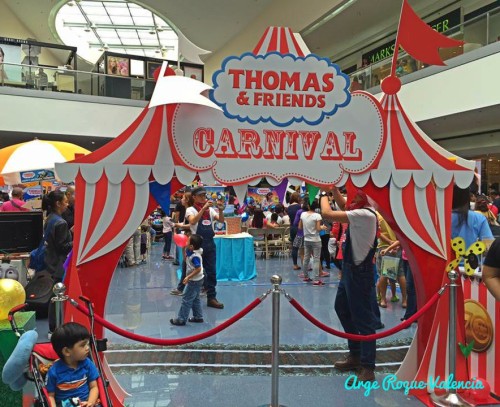 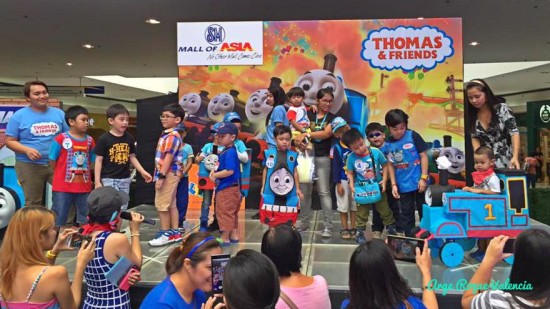 The little boy on the right, with a mom in black florals, won the contest

We got there just in time when the contenders for the Best Thomas Costume got up on the stage to show off their creative ensemble. Three entries stood out and one could the painstaking efforts that parents have put in just so their child could have the perfect Thomas costume. The youngest of the contestants, I think he’s only a year old, won the competition. His is the most detailed and elaborate costume that best resembles Thomas. I wish that I can do that same costume for my little boy! 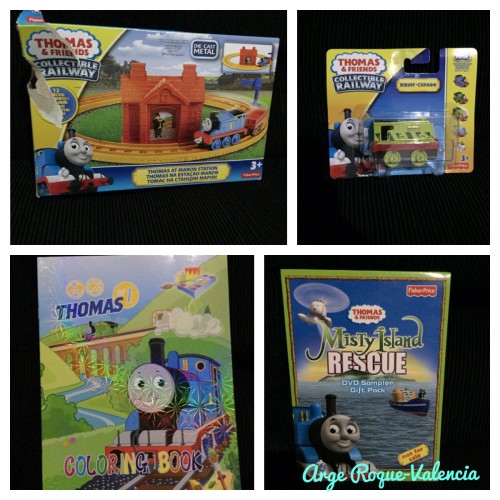 Goodies from the loot bag

Our sweetie pie was so happy to have found a Thomas & Friends Starter Set in his loot bag that he was holding the whole time up until we got home. 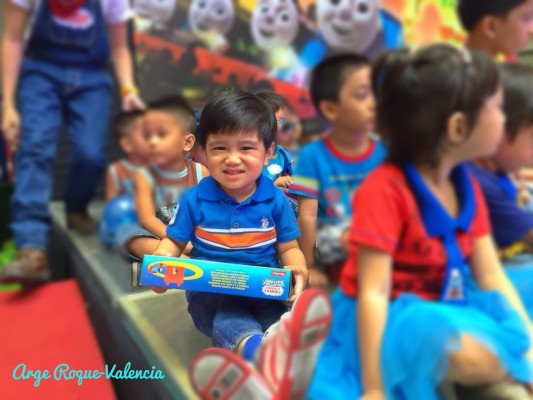 Louiji was holding his precious box everywhere he goes!

Kids were invited to gather together and sit on stage for storytelling. I forgot the name of the teacher who facilitated the session. It was a very interactive activity because the children were encouraged to participate by making train sounds at certain parts of the story. 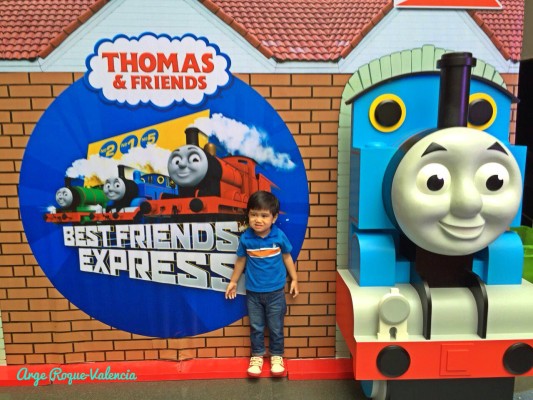 We stood on one side of the stage near the train replica and the backdrop. It gave my son a good view of the activities going on stage. 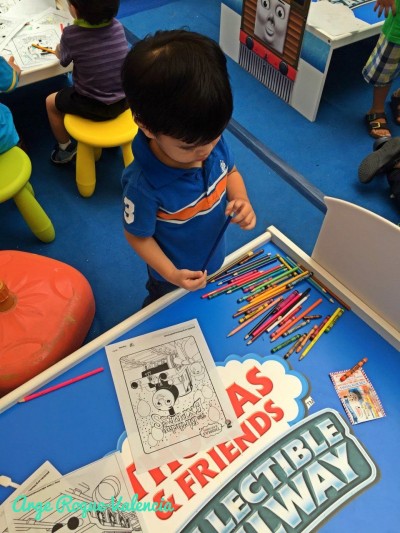 Some of the kids worked on the activity sheets available on several tables that were also filled with color pencils. We stayed for a little while after the program because Louiji wanted work on his Birthday Express activity sheet. 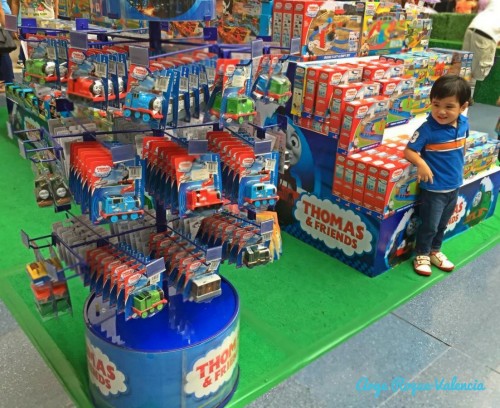 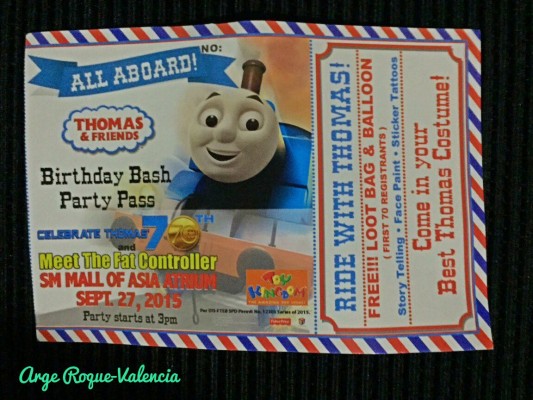 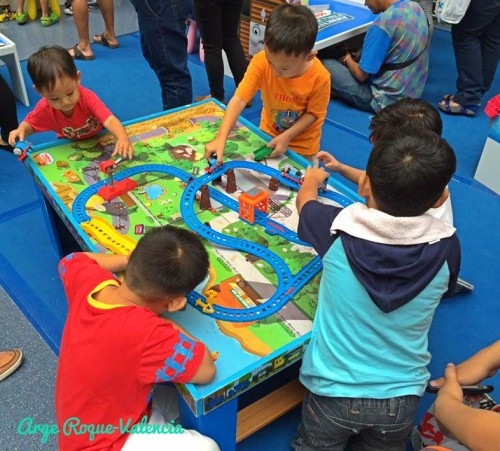 The other boys gathered around a table of Thomas & Friends play sets. They got so engrossed in putting the pieces together and running the engines on the railway.

There was also a long line for face painting which I didn’t attempt to line up for it will only trigger crankiness in our little one.

Thank you Moomy Musings for giving us the opportunity to take part in our favorite steam engine’s birthday bash. Thank you Rich Prime Global for hosting a wonderful event for the little engineers. We had a great time last Sunday!

Happy 70th Birthday, Thomas! Thomas the Tank Engine will be celebrating his birthday on September 27 at the SM Mall of Asia Atrium with all the kids and the young at heart who have known and came to love this Really Useful Engine.  Check out the poster below to find out how you can be part of the upcoming festivities. 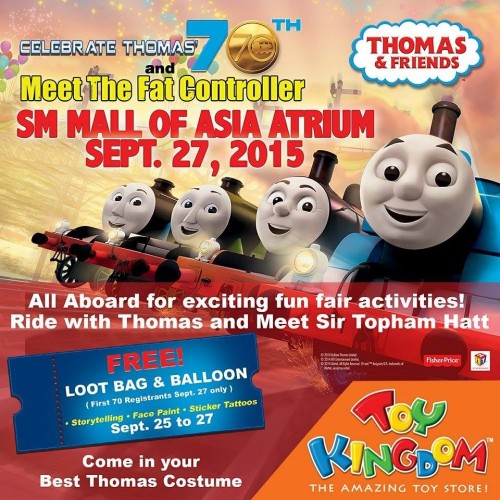 I have discovered Thomas and Friends through my nephew. His toddler years were filled with watching the adventures of the blue steam engine on TV and having toys, bags and stuff bearing his favorite train. The fascination and endearment was passed on to my own little boy. Louiji enjoys watching Thomas and Friends and gets giddy each time I sing its theme song. My nephew has passed on his precious Thomas toys to my son who simply loves playing with them. The bulky Thomas train in the photo below is my toddler’s favorite. This chunky, battery-operated train moves and turns around whenever it bumps into an object. It keeps our little one on his toes as he chase Thomas around.

Louiji was amazed with his little Thomas train. He was inspecting the bottom to find out where the steaming sound and music comes from. This piece actually comes with a railway but we rarely take it out because the little boy delights in seeing Thomas move around the house. 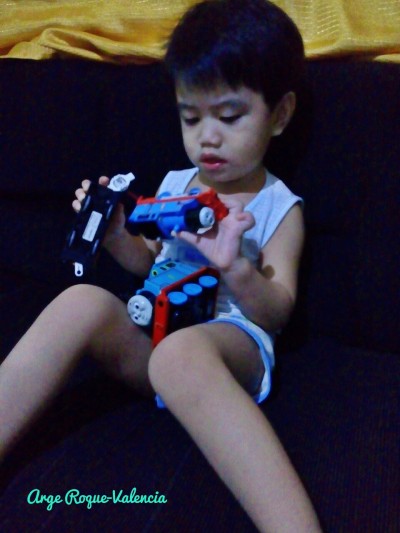 Louiji has his own favorites among the Thomas and Friends episodes. He watches them over and over. I like it that the show goes beyond providing entertainment for the kids. Each episode conveys the value of friendship, teamwork and fair play. 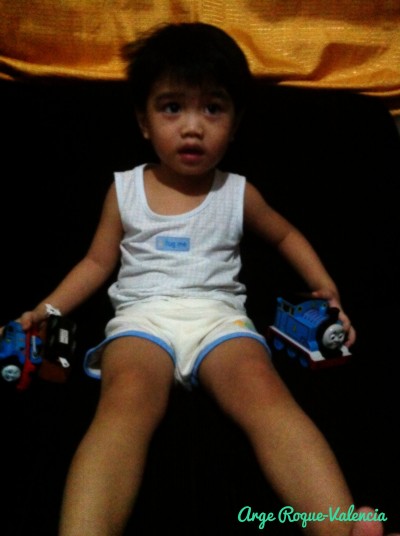 Get to know more about Thomas and Friends by visiting their website.

Check out the Richwell Club Facebook page to know more about the Thomas’ Birthday Bash. See you there!