The Working Mom All About Kids Bazaar

I hope everyone is safe and sound and have survived after that heavy-monsoon-rain-filled long weekend.

Yes, this is a super late post. I haven’t blog about this right after or soon after. Got caught up with a lot of deadlines. But, here it goes 🙂

Last August 10, Saturday, we went to the Rockwell Tent to shop at the Working Mom’s All About Kids Bazaar. My husband was game for it because he is just as excited as I am to buy stuff for our dear baby Louiji. The 70% discount on clothes, toys, accessories and equipment which was indicated in the event’s online poster was a big come on for us. We thought that we can buy plenty of things without breaking the bank. We were also hoping to buy a booster seat.

We got there before lunch time because we are attending an Avent event later. We were expecting to see the whole tent filled with booths and kiosks. It wasn’t. The sellers and other exhibitors were confined inside a room that is as big as a function room. There were not too many but most of them have plenty of good stuff to offer.

We were not able to buy a booster seat because nothing was available at the bazaar. We also

wanted to buy a soft and smaller teether for Louiji. Haven’t found one, too. So, we bought what we saw and what we like 🙂

Baby Company was there and they’ve got small rubber squeaky toys which are perfect bath time companions (aside from Dave the Minion) for our baby. We held out two sets for Louiji to choose from. He reached for the space creatures set. The red star caught his eye. So we bought it.

We dropped by Paper Chic Studio’s booth. I’ve been following this seller on Instagram and Facebook. I have also messaged Cai, the owner, when I missed her free wash design workshop in a previous bazaar. I’ve been to talk to her regarding what happened on IG. I was following another reseller of paper party favors online who has been using some of her product photos pala! I have liked one of the photos. I didn’t know that it belong to Paper Chic Studio! My username was part of the screenshot that Cai took when she called the attention of the copycat. Kahiya! I was mustering enough courage to talk to her while I was checking out on her products. I bought a set of assorted paper straws (50 pcs for Php150) and a pouch of baker’s twine (Php50). I was planning to hand her the payment when more people went to her booth. I lost my chance so I just gave my payment to her assistant.

Just in front of Paper Chic Studio’s booth was that of Zomato’s. Zomato is a restaurant review site. Kind of like Munchpunch. Hubby went to chat with the Zomato peeps while Louiji and I were at Cai’s booth. He got a Zomato shirt, their cool mug and a button

pin because he has a Zomato app in his phone and on the spot, he followed them on Facebook and Twitter. My husband was happy with his swag! We are both easy to please. Give us a loot bag and we’ll be giddy as kids.

I’ve been wanting to get our baby those cute plastic bibs that we can use each time we feed him with solids. We’ve found a stall that sells all kinds of bibs. I saw an animal print cloth bib (Luvable Friends brand, Php100) which has soft plastic as its front cover. I think that my little would love a bib that has a giraffe, lion, monkey and elephant for design. He has become familiar with these creatures because he has seen them from the animated movies that we let him watch occasionally.

The adjacent booth sells pretty dresses, cute onesies and printed cotton bibs with burp pads. We fell in love with the Silly Monkey Clothing Little Man onesies (Php200) and bought one for Louiji. We got the one in navy blue stripes with a printed big tie. I wish I saw it before my baby’s dedication. We had Little Man as our theme. When I saw the seller’s cloth-bib-and-burp-pad combo, I kind of resented buying the one with the plastic. Hubby said that he saw it when I was still choosing from the bibs at the previous booth. For some reason, he didn’t stopped me. My husband told me that we’re fine with what we purchased earlier. It’s in the same price plus it’s cute, too.

We left the bazaar after we’re satisfied with our purchase. We took more pictures outside using the backdrops that Working Mom has set up. We checked out the food stalls stationed in the other side of the tent. We were supposed to eat from the kebab kiosk but we couldn’t bear the heat. It would be too much for Louiji so we went inside Power Plant and had our lunch at Kenny Roger’s instead. We also needed a place where I can breastfeed my baby while eating. I forgot to mention that the organizers made room for a breastfeeding area inside the bazaar. Perfect for breastfeeding mommies who went shopping with their babies in tow 😉

Here are the stuff that we got from the bazaar: Red shirt from Zomato, green animal print bib from Luvable Friends, Zomato button pin, Zomato doodle mug, baker’s twine and assorted paper straws from Paper Chic Studio and Little Man onesie from Silly Monkey Clothing. The rubber squeaky toys were not in the picture. Forgot to include them. Sorry. 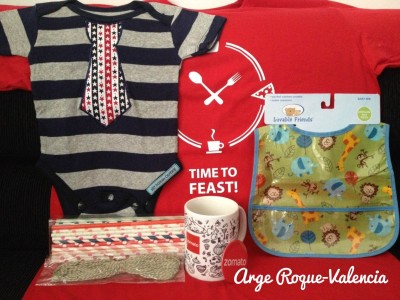