Grace Abounds Leave a Comment on Our Ramen, Finally!

I read last week that our all-time favorite ramen restaurant is finally open for take-away and delivery. I was tempted to order but then the shipping cost would be too much since it is only available on selected branches. And what do we do when we’re craving for our favorite but do not have the means to procure it? We make our own! 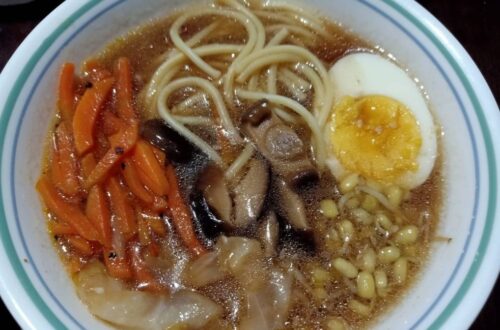 I’ve attempted lots of times to cook our own ramen – reading several foodie and notable chef blogs and even bought Japanese noodles and mirin in an effort to make my noodle soup as authentic as it can be. Pretty ambitious ha!

But, today’s ramen attempt, though not perfect, was successful! By the way, my success meter is based on how fast and how well my family would consume what I put on the table. Well, the husband was happy, Kid #1 ate with gusto and Kid #2, who used to be picky, couldn’t wait to dip her spoon on our ramen bowl.

It took a long time to cook our bowlful of goodness. Big thanks to my husband who helped out in cooking lunch today. I couldn’t get too close to the stove because I got splattered with boiling water while cooking the spaghetti noodles that we used for the ramen. So I had to guide him as he cooked the rest of the ingredients that I have prepared. Roughly, here’s our cooking process. It’s kinda long so if you want to do it, it would require a great deal of patience.

Here’s what the bowl looked like prior to adding the soup. 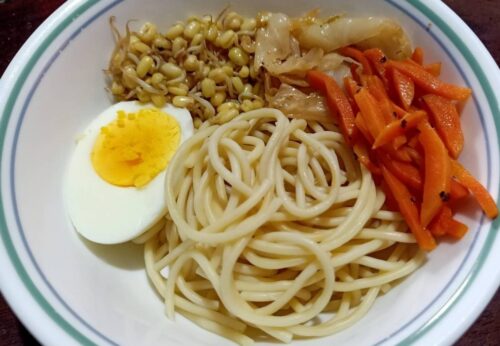 We had a hearty and fuller meal! It was a meatless ramen but it was flavorful. Next time, I would make it more legit and incorporate mirin (we ran out of it), spring onions, silk tofu and perfectly timed Tamago.

Go ahead and try to make your own!

Hello there! Thank you for visiting for my humble online home.

I'm a Christian homeschooling mom of two, a writer, and sometimes, a web marketing professional.

Heaps of Grace serves as my creative space where I share about homeschooling, crafting, baking, sewing, and recently, Amigurumi.

Life is beautiful because we have an amazing GOD! Ours isn't perfect but we have a loving GOD, who sustains us with His blessings and mercies. His grace abounds!